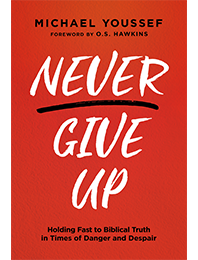 In Colossians 2, the apostle Paul presents a magnificent picture of how the Roman legal system worked. Under strict legal procedure, the Roman authorities would interrogate a witness.

Then his testimony had to be substantiated before the Roman court could bring his case. When the indictment had been handed down and the case came to trial, it was necessary for the accuser to stand in the presence of the accused to give his testimony before the judge.

God in His mercy and compassion provided us a way out.

This picture can be applied to our spiritual standing in this world. We are guilty sinners, and our accuser is none other than Satan. The Bible says that the wages of sin is death (see Romans 6:23)—we deserve death for our sin. And Satan is quick to point this out. He prosecutes us, unearthing every reason we should be thrown into the pit of hell. His accusations are just and true. A judge cannot dismiss an indictment if it is true. (That is why when the Pharisees brought forth accusations against Jesus, Pontius Pilate tried to wash his hands of the whole affair—he could see that Jesus was innocent (see Matthew 27:24).) But we cannot escape the just judgment of our sin. There is no one righteous, "for all have sinned and fall short of the glory of God" (Romans 3:23).

But God in His mercy and compassion provided us a way out. He spared not even His own Son, but sent Him to live perfectly for us, die in our stead, and atone for the sins of the whole world—all of yours, all of mine, if we will but receive the gift.

In Christ's day, when a criminal was convicted and sentenced, an official writing was drawn up by the courts. In it would be an explanation of the crime and its penalty. That is why Pontius Pilate had written on Jesus' cross: "Jesus of Nazareth, the King of the Jews" (John 19:19). When a man finished serving his sentence and was released, his indictment would be taken down. A judge would write across it tetelestai, which means "paid in full" or "it is finished."

As Jesus Christ hung on the cross, this was the last word he uttered, "Tetelestai"—"It is finished" (John 19:30). If you have committed your life to Jesus Christ and have accepted Him as your Savior, Satan has no legal right against you. You have been ransomed. In Christ, you have the victory!

Prayer: Jesus, thank You for saving me and perfectly paying the price of my sin past, present, and future. It is finished because You are loving, full of mercy and grace. I rest in You, my Redeemer. I pray in the name of Jesus. Amen.

"Everyone born of God overcomes the world. This is the victory that has overcome the world, even our faith" (1 John 5:4).